Expect that 1-DA feeling when you purchase 1-DA Shapes’ products!!!

We’re committed to delivering to you the 1-DA feeling through our quality materials, amazing products and exceptional service.

Gavin Upson (founder, owner & shaper/designer) has been shaping elite surfboards since 1996. Gav has designed & shaped boards for professional surfers & world champions, including Sally Fitzgibbons & Adriano De Souza. He has shaped or designed/shaped winning boards for almost every men’s & women’s CT event. However given he was the main ‘ghost’ shaper at DHD for 10+ years, many pro riders cannot be named.

Gav is passionate about working closely with his customers to ensure they get the best boards under their feet to progress their surfing, for everyone from the micro-grom to the weekend warrior to the best surfers in the world. 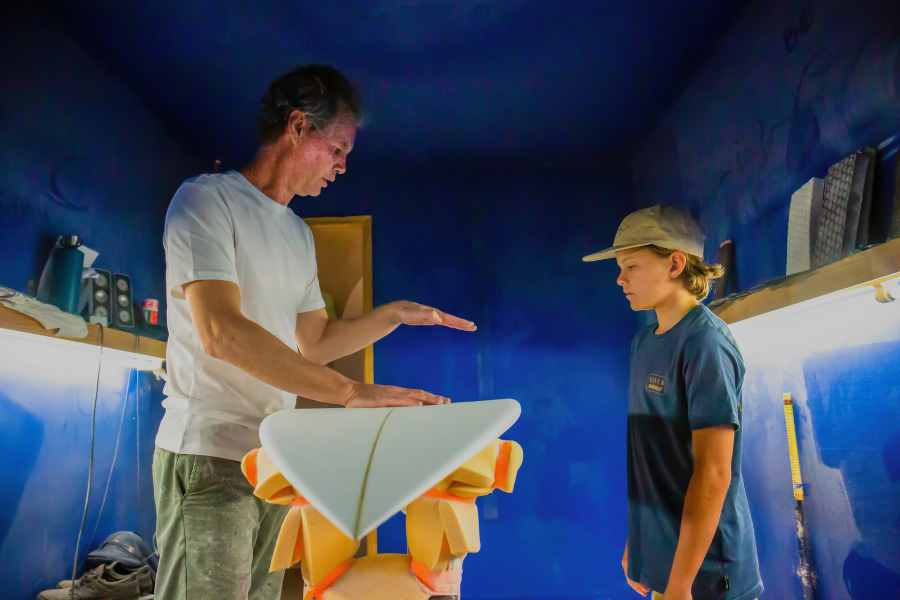 About the Shaper – Gavin Upson 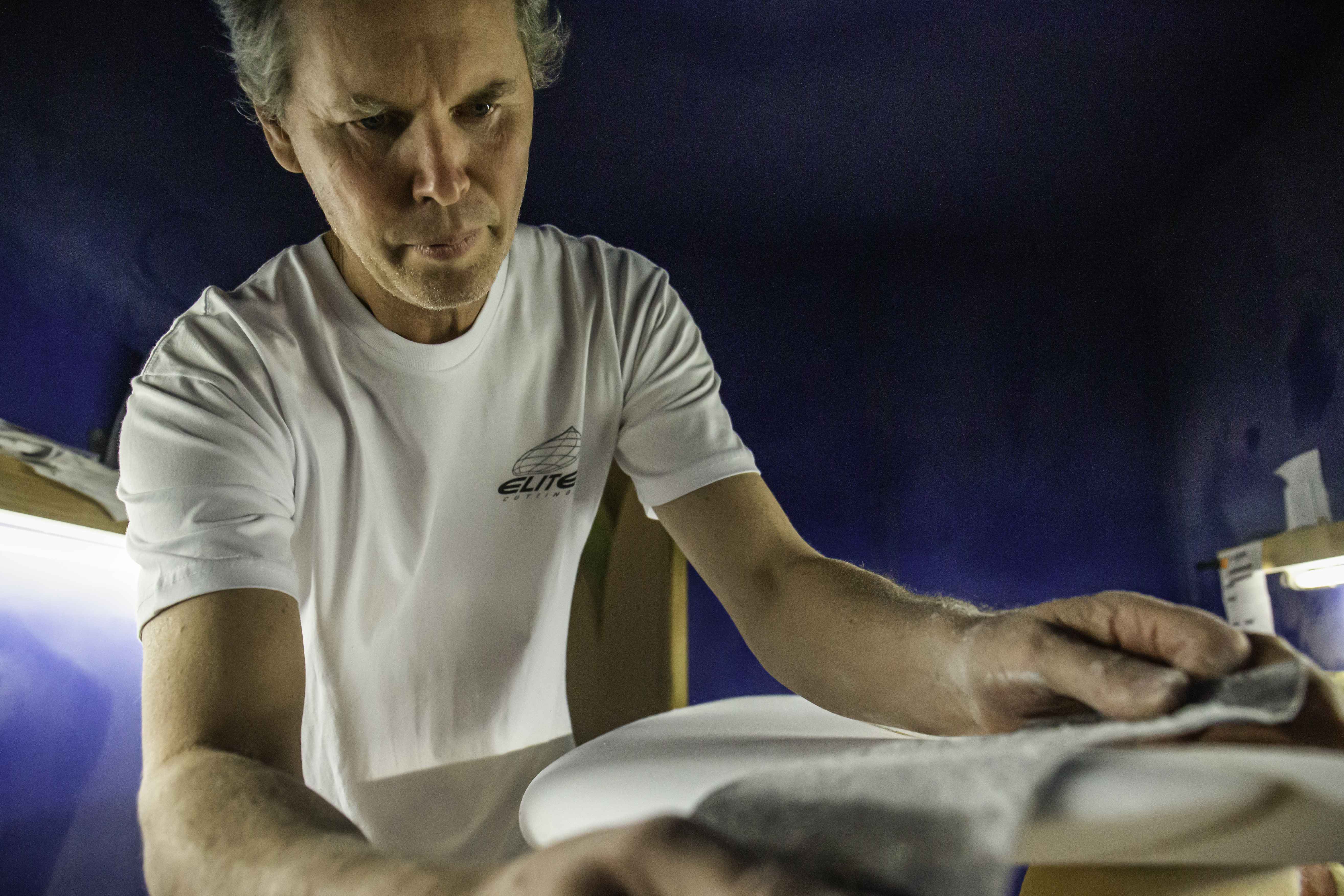 My teenage years growing up in Waitara (New Zealand) saw me into skateboards & speedway racing. One day, I asked my brother if I could have a go of his surfboard. I got the typical response ‘Yeah but if you ding it or break it, you own it.’ I paddled out and caught a wave. I was hooked from that moment on. I cancelled the race car I ordered earlier that day, sold my existing race car, bought a single fin surfboard and started surfing daily.

When I rode skateboards, I had a go at making my own skaties. When I raced cars, I did a lot of ‘tinkering’ myself. So naturally when I started surfing, I wanted to build and shape my own boards.

My first job in the surf industry was in the manufacturing of Freezing Hot Surfboards but it didn’t include shaping. My heart was set on shaping but my boss always said ‘I’m not teaching you to shape, you need to go to Australia for that’. So off I went to Australia.

In Australia, I worked for a number of Sunny Coast board manufacturers but unfortunately they had no interest in showing me how to shape either. So I took the initiative and taught myself how to shape and started up my own label, Intense Surfboards. During this time, Impact Surf (who I was working for at the same time) gave me one of their team riders to make some boards for. That was my first experience at shaping for a team rider and it fueled my fire to make boards for professional surfers.

I made boards from my own factory (including hand-shaping all boards) for about 6 years, before moving to the Gold Coast to work as a ghost shaper for a global up-and-coming surfboard manufacturing company. I quickly progressed to the position of main ghost shaper, where I was very fortunate to meet & shape boards for some of the world’s best surfers and watch them win comps on those boards. My dream was starting to come true.

I dedicated the next 10+ years to that label. During the last few years at this company, I embraced shaping design programs and reveled in learning and designing boards by computer. The company closed down in 2011 and started up again a few weeks later, however I decided against re-commencing to work for them in pursuit of my own label.

My first major inspiration that I can openly mention came in 2004. The boss was away and Parko walked in one late afternoon saying ‘I just broke my board. I need another one but I’m leaving tomorrow to LA’ to compete at the Boost Mobile Pro Trestles. As you do, I said ‘Hey, no problem’. About 15 minutes later, I had hand shaped the board. It was one of the fastest shapes I had done but it just seemed to flow from my hands. The next day, Parko flew out to the US with his new board. He rode that board from Round 1 right through to the final, which he won! After the presentation, Parko called me to thank me for making the board. It was the first time a WCT surfer had called me personally to say thanks. It was such a high.

My dream to shape for the world’s best surfers was further fueled by my meeting with Adriano De Souza in 2008. I met Adriano during an annual European shaping trip. He sat on the balcony with me and introduced himself. He asked me why I wasn’t inside with the rest of the people and I told him I wasn’t into that sort of thing. I asked him why he wasn’t inside and he said ‘Same as you’. He asked who I was and what I was doing in Spain and I told him that I was shaping boards under a certain label for WCT surfers, as well as shaping a whole bunch of stock and custom boards too. He asked if I could make him a board, which I did. It went ok so we talked and I made him another one, which he placed 3rd (lost to Kelly Slater). The next year (2009) when he came to Australia, we worked together closely to put a magic board under his feet again. I ended up making him more than one magic board – which I’m sure is every WCT surfers’ dream. I was so proud to watch him place 2nd to Parko at the Quikie Pro at Snapper that year.

Out of respect for my former position as main ‘ghost’ shaper, there are many pro surfer wins that I wont mention. However, here’s a few teasers for you. I’ll leave it up to your imagination to consider which other pro surfers were amongst those who rode boards designed and shaped by me over the 10+ years prior to 2012 …

I was very fortunate to look after Sally Fitzgibbons through her junior career. In 2010, Sally ranked #2 in the world. In 2011, Sally placed 3rd at the Roxy Pro and went on to ring the bell at Bells Beach too (Sally’s 1st WCT win). Sally then won at Taranaki (NZ) (my home town which made it extra special for me) and Huntington (USA). She ranked #2 in the world again in 2011.

In 2010, I designed a new curve for Steph Gilmore. I made a board with the new curve and asked her if she wouldn’t mind testing it to provide feedback. She took it to the Swatch Girls Pro in Hossegor (France) and won the event on it. I joked with her ‘Hey I only gave it to you to test and give me some feedback so I could make it even better for you’. She responded ‘Well it goes pretty good then’.

In 2011, Adriano De Souza placed 5th at the Quikie Pro at Snapper, 3rd at Bells Beach in Torquay, 1st at the Billabong Rio Pro in Brazil & 1st at the Rip Curl Pro in Portugal. He was #1 in the world for 7 weeks straight. It was my dream to get a surfer to #1 in the world on a board I designed & shaped. For it to be Adriano (someone I consider a friend and respect) and for it to be the first time a Brazilian ever ranked #1, was particularly special for me and I will never forget it.

In 2016, I made some boards for Silvana Lima for the Sydney International Womens Pro. I made her 2 PUs and 1 of my ‘yet to be released’ new 1-DA Exclusive Epoxy technology boards. Silvana chose to rode the 1-DA Exclusive Epoxy technology board throughout the whole contest, winning every heat up to and including the final. That result provided her with the #1 rating on the QS for that year. Read more HERE. 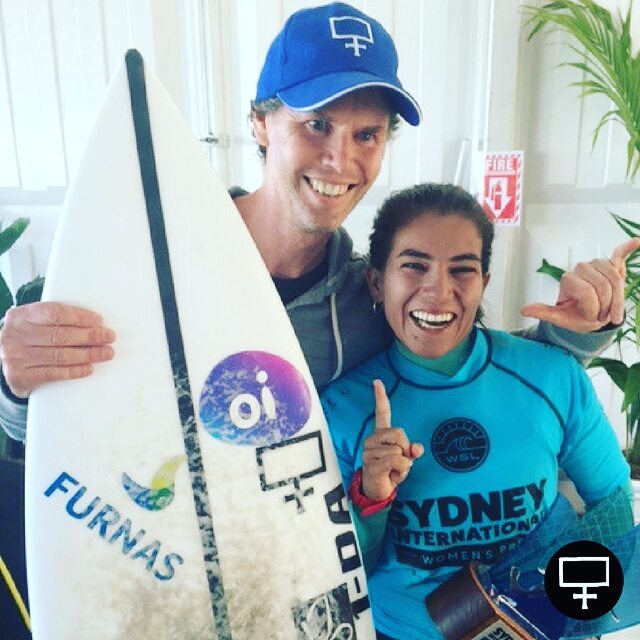 “I will continue my passion for making surfboards to fulfil my dream … for a male and female pro surfer to be crowned World Champion again but this time under my own label.

So I’d like to officially announce the start of 1-DA Shapes in 2014.

Enjoy the ride with me! ”